Discovering Places …What not to be missed while staying at San Giovanni Al Monte.

Our hamlet, San Giovanni Al Monte, is a medieval village, centrally located in Umbria and surrounded by hills covered with woods rich in oak trees, pine trees and olive groves.

Two great religious figures,followers of the Franciscan Rule, that chose the hamlet to live and preach, need here to be named among others: Simone, the blessed, born in Collazzone in 1208 and dead in Spoleto in 1250, a noble man who left his wealth to preach in France and Germany and Jacopone da Todi, who breathed his last in Collazzone on Christmas eve in 1306.

The tiny hamlet retains all its Medieval flavour with its narrow, concentric streets, its symmetrical alleys and its mighty towers, from where to enjoy the view of the valley below.
The hilly landscape of Collazzone offers you the chance to walk along beautiful paths that highlight the rich environment and the landscape.

What not be missed when you get to Assisi?

Certainly The Rocca Maggiore, protecting for centuries in all its mighty the town.

The Eremo delle Carceri is nowadays an oasis of peace and quiet, surrounded by oak trees from the Subasio area, where St Francis used to love go praying.

The Porziuncola Museum
This museum hosts two important paintings dating back to the Franciscan period, deemed to be among the masterpieces of Italian Medieval Painting: The Crucifixion by Giunta Pisano and the icon, portraying St Francis, attributed to an anonymous Umbrian painter in the 1200.

The Palace of the Capitano del Popolo (The people’s Captain Palace)
Made between 1212 and 1305, this building became, from the very beginning, the seat of the town army Commander, the so-called People’s Captain.

St Francis’ wood
A cosy “locus amoenus”, a happy place, where you can delve into history, nature and the sacred.

The people’s Tower
The people’s tower is soaring on the Town Hall Square in all its greatness and elegance. 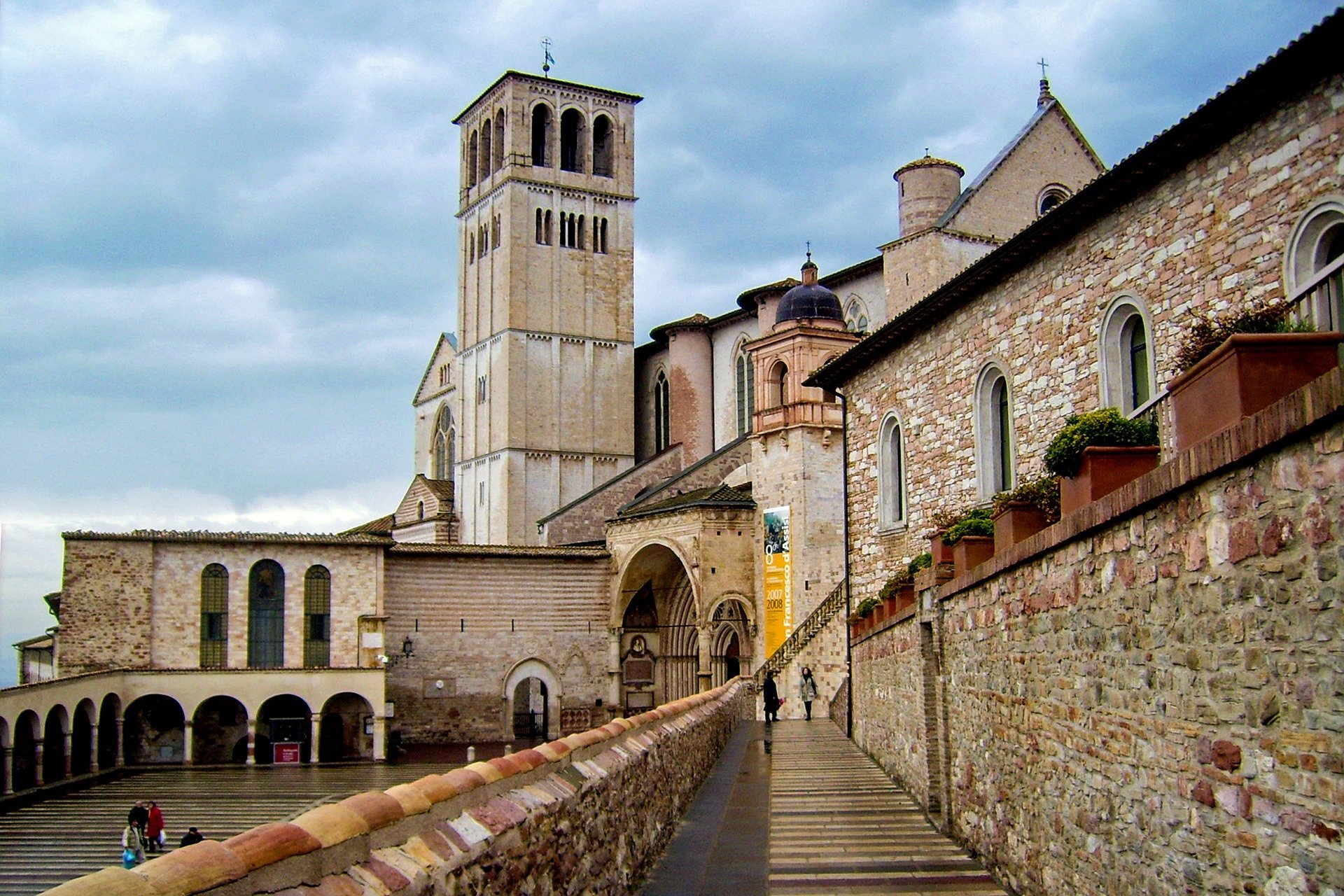 A magical, unique place, strongly bound to St. Francis’s story, who lived and preached here, Assisi still retains the flavour of a small, medieval hamlet, left untouched by the passing time, still surrounded by massive walls and mastered by big bulk of The Rocca Maggiore and the Great Cathedral.

What cannot be missed while visiting Gubbio?

St. Ubaldo Cathedral
The Cathedral guards the Arcibishop’s body, who is the city Saint Patron and is also the arrival of the Ceri Race: one of the most famous and popular festival in Italy.

The Consuls’ Palazzo
Right in the centre of the city, there is The Palazzo dei Consoli, built in a Gothic style, the building, together with its bell tower and its arcade, is the seat of the wonderful local museum and sits on the grand and amazingly beautiful Piazza Grande.

The City Museum
Located inside the Palazzo dei Consoli, the place is the seat of the famous Egubine Tables: seven bronze slabs where the most important text written in Umbrian Language is engraved and where we find a long description of religious rites.

The Roman Theatre and Antiquarium
Dating back to the 1st century B.C, the theatre is built with sandstone blocks and is the seat of classic performances in the summer.

The Duke Palace
Built in 1470 at the behest of Federico from Montefeltro, Duke in Urbino, the Palazzo Ducale is nowadays the seat of the replica of Federico’s “studiolo”, similar to the one in the Palazzo of Urbino, coated with wood, engraved panels.

Gubbio Cathedral
Devoted to Saint Mariano and Saint Giacomo, the Cathedral is in Gothic style and shows 16th century frescoes.

The Bargello Fountain
Known also as the Mad People’s Fountain, its fame is due to a popular tradition that asks visitors to run around it three times to get the Mad Hat License.

The Canons’ barrel
Inside the Canons Palace, a wonderful 16th century barrel is hidden, that used to belong to the Gubbio monks. The grape must, used to be poured inside the barrel through a hole made on the upper floor and could contain up to 20.000 litres. 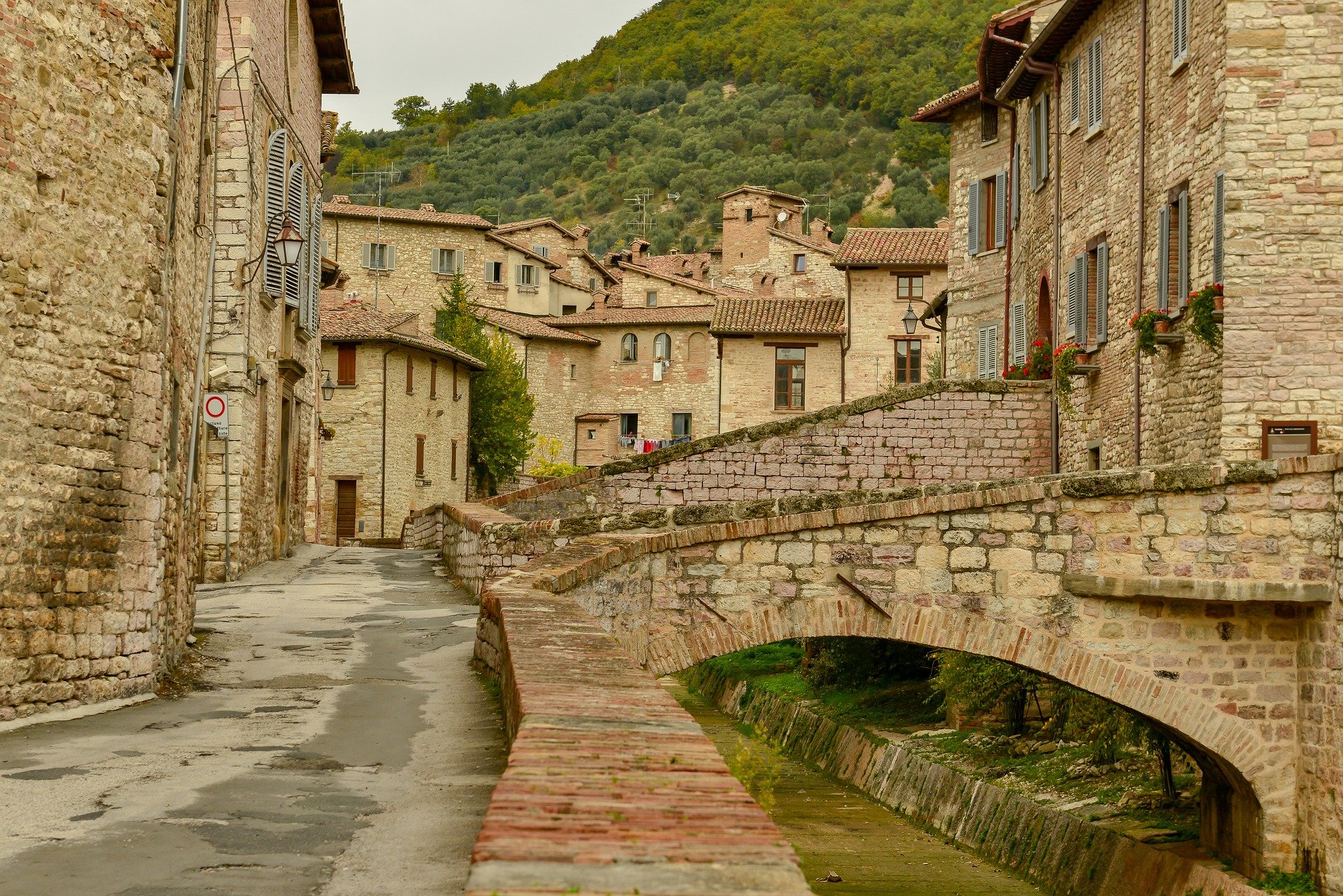 A beautiful medieval city, Gubbio is placed at the slopes of the mountain Igino, in the heart of Umbria and keeps jealously ancient traditions, as the Ceri race or Ceri Festival, to be held every year on the first week of May.

How far is it Gubbio from Agriturismo San Giovanni? Only 1 hour’s driving, 74 kms using the SS3bis and SS318.

What cannot be missed when in Perugia?

4 November Square
In Perugia all the roads lead to 4th November Square (Piazza 4 Novembre), the gathering point where all the great events take place and where a breath -taking view of the Tiber valley can be enjoyed.

Saint Michel Archangel’s Church
The most ancient church in town, known as the little temple, the church dates back to the 5th Century and shows a circular plant, Paleo Christian architecture.

St. Lorenzo’s Cathedral
Built in 1490, with a bell tower built later between 1606 and 1612, it is enriched by the Saint Ring Reliquary, among the masterpieces of the Renaissance goldsmith art.

The Priors ‘Palace
Built in the XIII century, the Palazzo is an elegant Gothic building hosting the National Gallery of Umbria, where Medieval Italian art masterpieces are kept.

The Etruscan Arch
One of the seven monumental doors, located within the mighty walls, the Arch was built in the 3rd century B.C and restored by Augusto in 40 BC, after his victory in the Perugia war.

The Frontone Garden
The Garden takes its name from the front of the Triumph Arch that closes the amphitheatre built in Travertine and is the main city garden.

The Rocca Paolina
Built in 1540-1543 on the Pope Paolo III’s request and on a project by Antonio da Sangallo the young, the Rocca Paolina was the biggest and most famous fortress of the time. 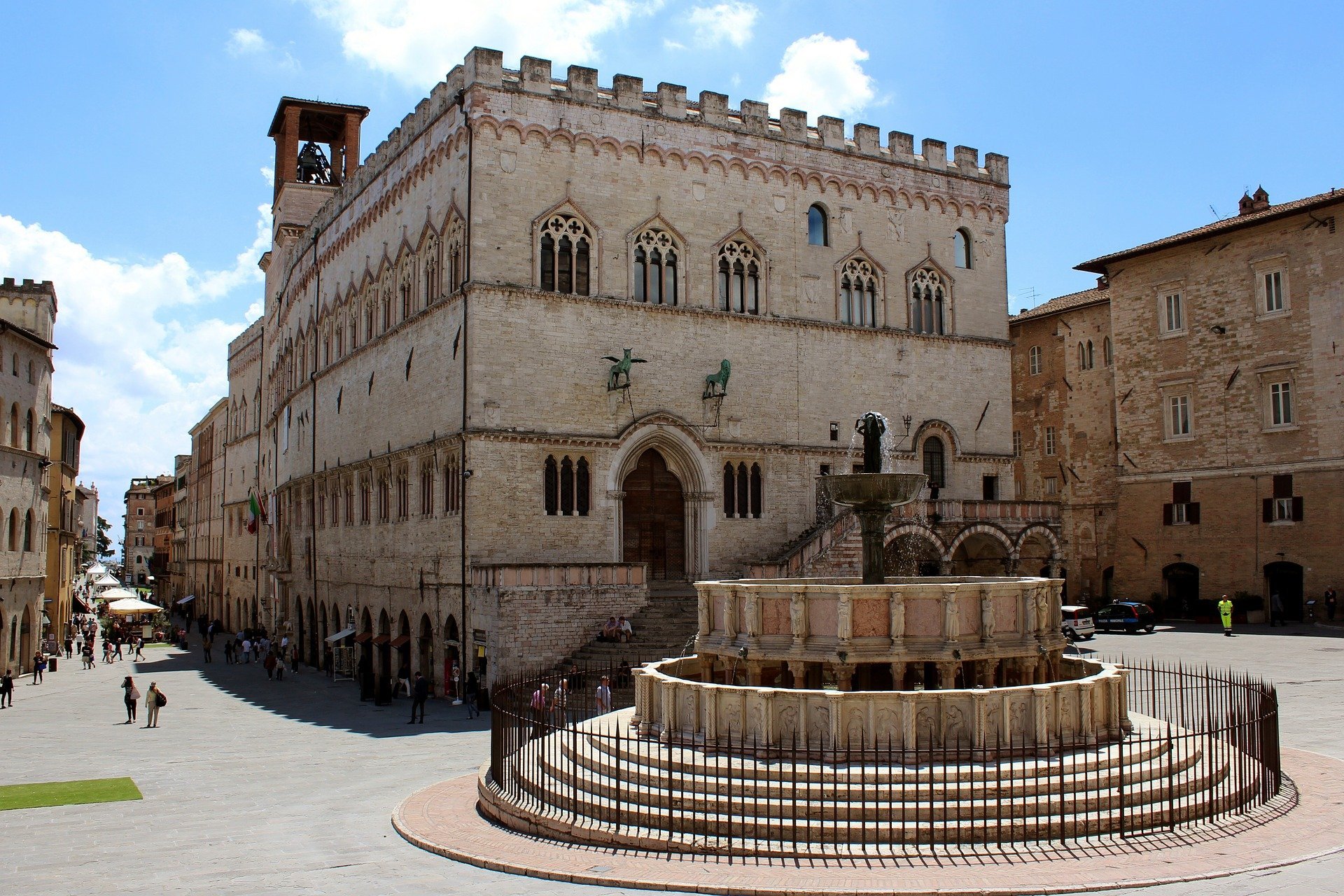 Perugia had Etruscan origins and soon became a flourishing roman municipality known under the name of “Augusta Perusia”. Today it is the capital city of the region and a cosmopolitan city, famous all over the world for its international events like Euro Chocolate and Umbria Jazz.

How far is it Perugia from Agriturismo San Giovanni al Monte? It is only 35 minutes driving (32.4 kms), using the SS3bis.

What cannot be missed in Spello?

Spello ancient doors
Spello boasts the best kept Roman ancient walls in Italy, where various doors open to the world, among them the Porta Consolare with its three entrances, three funeral statutes and a tower topped by an olive tree, the symbol of the local most famous product.
Then we have Porta Venere with its Properzio’s towers and Porta Urbica with its peculiar signs on the wall.

Santa Maria Maggiore Church
With its 17th century façade, the Church retains the original portal with its Roman friezes and its Roman bell tower. Its baroque interiors are the perfect frame for the Pinturicchio and Perugino’s frescoes.

The painting museum
In the historical centre of Spello, inside the 16th century Palazzo dei Canonici, there has been, since 1994, the Town Museum of Paintings, rich not only in paintings but also in precious cloths, goldsmith art and sacred furnishings.

St Andrew ‘s Church
Dating back to the 13th century, this church of Franciscan origins, has undergone various transformations.
Its true core is the altarpiece with the Holy Virgin and the Baby on the throne and the various saints, by Pinturiccho and Eusebio of St. Giorgio.

St Lorenzo’s Church
Its façade is a surprising of historical eras: from the XII century arcade, to the XVI century rose windows, to the VIII century decorations. Its plant has one nave only and is Latin cross shaped.

The Tega Chapel
This tiny Chapel is worldwide renowed for its 15th century frescoes by Niccolò Alunno and Pitro di Mezzaforte.

The Roman House
In Spello there is house dating back to the 1st century AC, restored in the 2nd Century which was brought to light in 1885. 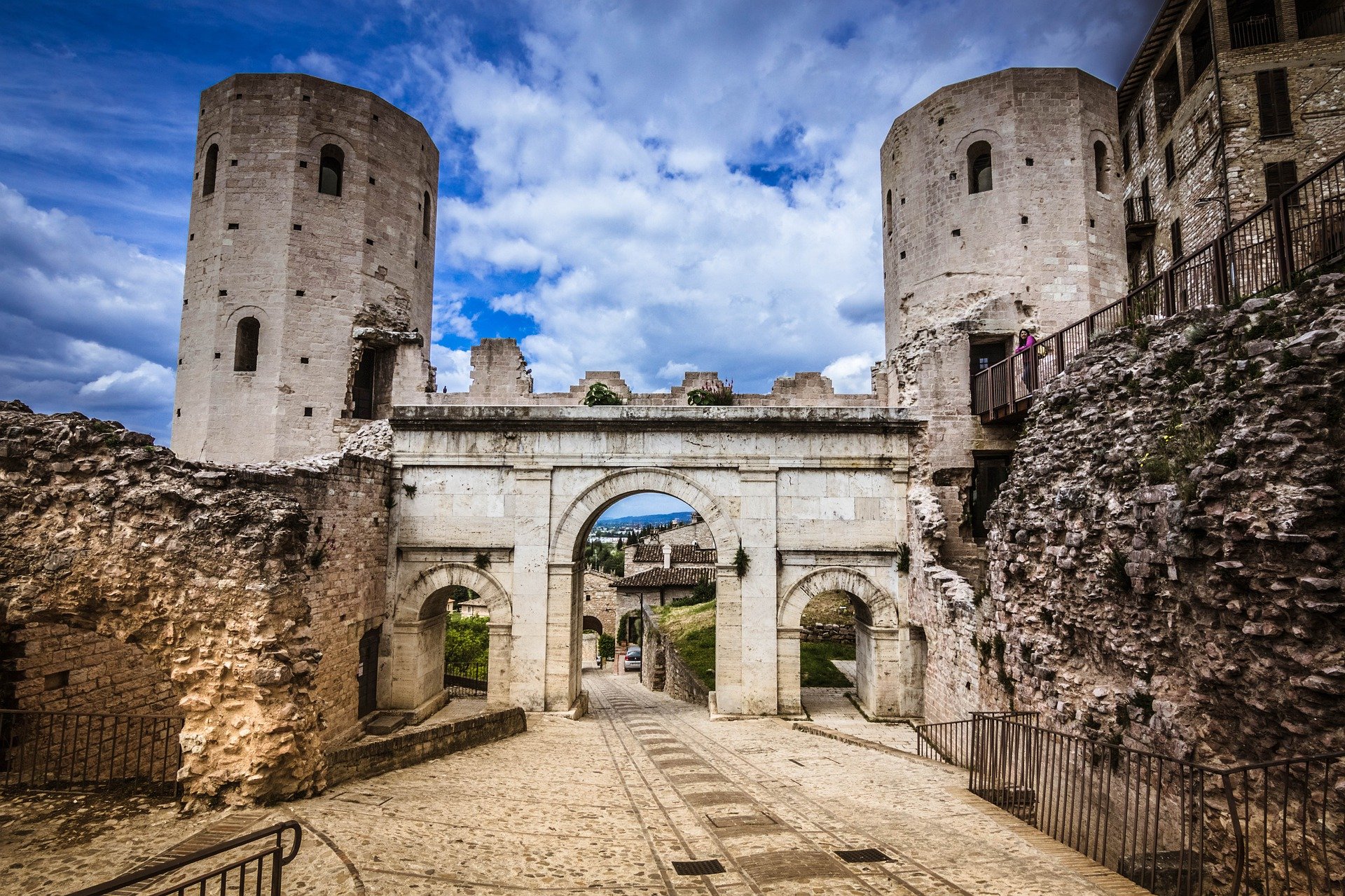 Laid on the buttress of Mount Subasio, Spello retains the wonderful vestiges of a glorious Roman past where, among its alleys, its frescoed churches and ancient monuments, some masterpieces by Pinturicchio and Perugino are treasured.

How far is it Spello from Agriturismo San Giovanni Al Monte? Only 35 minutes’ driving, 32.4 kms, using the SS3bis.

What cannot be missed when in Spoleto?

The Albornoziana fortress
The fortress, built in 1359 by the architect Matteo Gattapome, was erected on Sant Elia Mount and has a rectangular plant, divided into two courts by a high city wall that ends with the majestic main tower.

The Spoleto Cathedral
The Cathedral was built in the XII century at the centre of a beautiful square where various palaces look out: Palazzo Rancani, Palazzo della Signoria, the small church of Santa Maria della Manna and the tiny Theatre Caio Melisso.

The Druso Arch
Devoted to the Tiberius Emperor’s sons, the Arch was built in 23 BF, as per the request of the Spolentino Senate. Built with sand stone blocks, the arch represented the triumphal entry to the centre of the Roman city of Spoletium.

The towers bridge
A majestic work of art with 10 arcades, made in sandstone and supported by nine pillars that connects Sant Elia ‘s Hill with Monteluco.

St Salvatore’s Basilica (Cathedral)
This is the most ancient church in Spoleto, with origins dating back to the Early Christian era. 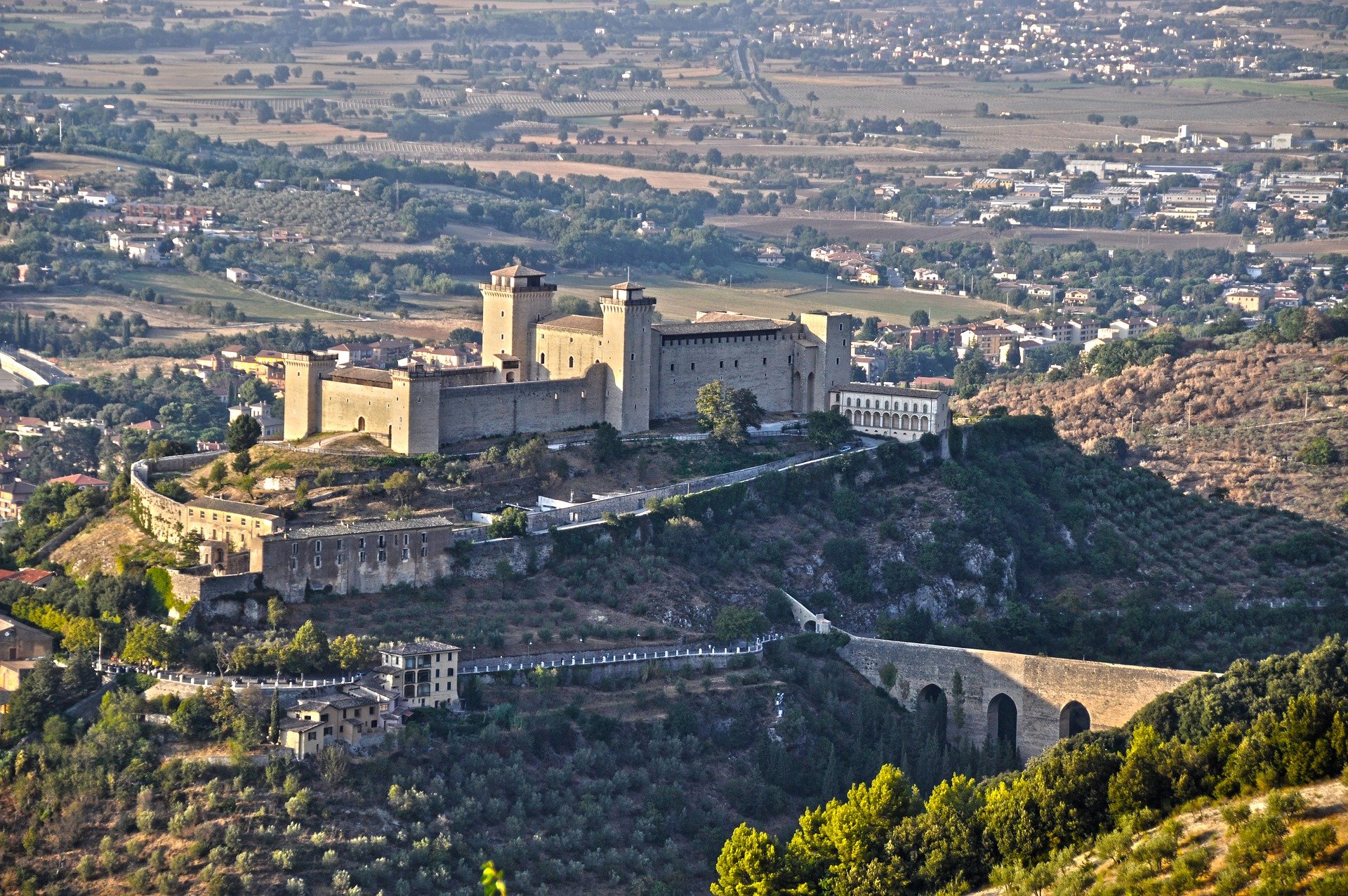 Spoleto, erected on the St Elia’s hill and colonized by the Romans, is nowadays famous for its Festival, an international event embracing dance, music, art and theatre.

How far is it Spoleto from Agriturismo San Giovanni Al Monte? Only 52 minutes’ driving, 44.9 kms, using the SP451.